Did you spot the female performer with the elderly lady puppet at Hat Fair? That was Lottie Clist with ‘Dorothy’.

Lottie was Playmakers 2019 Top Hat competition winner. The competition invites past and present University of Winchester students to submit ideas for outdoor performances. Lottie, and two other acts, performed at the festival for the public vote and Lottie won with a piece called 36%, which saw her and a friend, Kerryanne Hewlett, controlling a puppet that represented an ageing being. The piece explored themes of old age, isolation, loneliness, and physical and mental health.

After the festival Lottie thought about what she wanted to work on next, to return to Hat Fair 2020 as an official act. Unfortunately, as we all know, last year’s festival was cancelled due to the pandemic so Lottie was left wondering when she’d perform. Until that is, earlier this year, when Hat Fair Director, Andrew Loretto, broke the news that Hat Fair was back! Lottie could get to work. 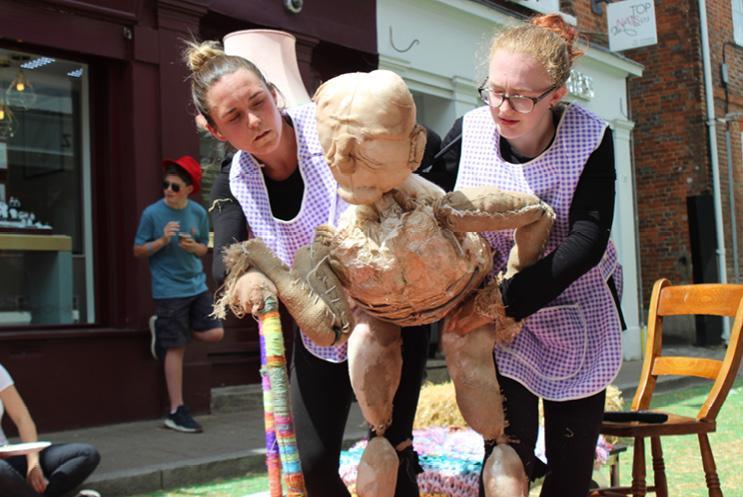 Prior, she’d pictured building a puppet based on William Walker, the deep-sea diver who helped save Winchester Cathedral from collapse after its foundations became waterlogged. Walker spent six years, from 1906 – 1912, diving under water to pack the foundations with bags of concrete to stabilise them for when the water could finally be pumped out for men to lay bricks. Lottie had learned about him through her own bricklayer father, and visited his memorial in the cathedral. She says, ‘It puzzled me that hardly anyone knew the story, including the locals.’

Now, Lottie discussed William Walker with Andrew and Engagement Producer, Kat Henderson, but also reflected upon how the pandemic had affected older people, making them even more lonely and isolated than before.

She says, ‘I’d pondered getting the old puppet from 36% out as I’d wanted to raise awareness of these issues and now Hat Fair 2021 was my chance. I was going to adapt ‘Norman’ from 36%, but Kat and I decided to build a fresh puppet. ‘Dorothy’.’ 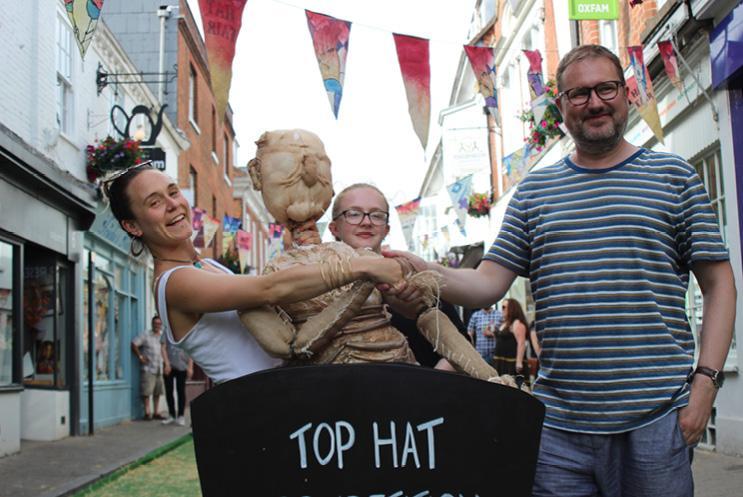 Lottie planned to walk around the festival with ‘Dorothy’, collecting stories from older audiences about how lockdown had affected them, to use them as inspiration for a performance piece.

So Kat introduced Lottie to casting and moulding techniques to help her make a mask that would become the face of her puppet – ‘Norman’ hadn’t had one – and Lottie’s willing victim to build the mould on was Deryck Newland, Chief Executive of Play to the Crowd, the charity behind Hat Fair!

Lottie says, ‘I’d always planned to make a female puppet but the gender of the person whose face we’d make the mould on wasn’t planned. I don't think Deryck minded much.’

Deryck sat for Lottie and Kat for 30 minutes while they slathered his face with ingredients, alginate and mod rock, to make the mould, making sure his nostrils didn’t get blocked, so he could breathe. When the mould was dry they used plastic of paris, air drying clay, and 20 layers of latex, to accentuate the facial features.

Lottie says, ‘All this means that the gender of your original castee doesn’t often matter.

‘Looking back I really like that we crossed genders, using a male castee to create a female puppet, especially as our society can still be quite stuck with gender norms.’

Next, Kat drew around Lottie’s body to get an idea of limb size and proportion, and Lottie used textiles and stuffing to create a body for her puppet, before finding clothes to dress her.

She says, ‘I’m a big advocate for recycling and reusing so her clothes came from charity shops, namely Naomi House who were kind to let me rifle through their rag bags and make a donation.’

Finally, Dorothy was brought to life with glass eyes, acrylic paints for brows, nose, lips etc., and a wig, and Lottie strapped Dorothy to her own body to practice walking with her before the festival.

‘Learning to manipulate and walk with her was the trickiest part,’ Lottie says. ‘But she looked so life-like, her movement needed to be too.

‘I hadn’t planned for her to become so life-like especially as ‘Norman’ was always described as a being or representation of humans, but her realness was communicated when I introduced her to the public. There were quite a few scared onlookers and gasps, but after some interaction from Dorothy and me breaking character (Lottie voiced Dorothy), most would come round to her.

‘Then people would open up with their stories of their parents, grandparents, great grandparents and you saw the human come out in people and vulnerability, compassion, empathy, sadness, joy, as they retold memories.

‘Most children were less scared and I think this has something to do with exposure, especially in regards to scary films that use puppets and mannequins. Teenagers seemed to be the most freaked and I also understand that some people have a genuine fear of puppets.’

Lottie continues, ‘I took Dorothy to see Shenanigans Unlocked on the Saturday evening and the lead guitarist’s wife said he had a genuine fear of puppets. I bumped in to them and he said how freaked out he was. Then he talked about his mum, also a Dorothy, who had a strong personality, and his fear disappeared. That was really memorable.

‘One lady explained how she caught Covid and lived alone and couldn’t see anyone for months other than via technology, which she didn’t find easy. This was highlighted to me many times in people’s stories over the weekend.

‘The portrayal of old age in society is a funny thing. As a child I feared going to see my great aunty in her care home. I wasn’t scared of her but of the other people I didn’t know, especially those with what I now know to be dementia and other age related diseases. But in other cultures elders are celebrated for their wisdom, they make the decisions. Our elders have seen and experienced so much change it’s unfathomable. Add to this a pandemic, lockdown, loss of routine and contact with the world. But we seem to have lost respect and I’d love to use puppetry to highlight that and develop work and workshops to bridge those gaps and build understanding.’

Lottie hopes to apply for funding and speak to residents of care homes to gather more stories, and make more puppets.

She says, ‘Kat and I have realised we make a good team in puppet building so we are going to continue to collaborate. I’m really excited for the future.’

As for the Walker project, Lottie hopes to pick that up too. 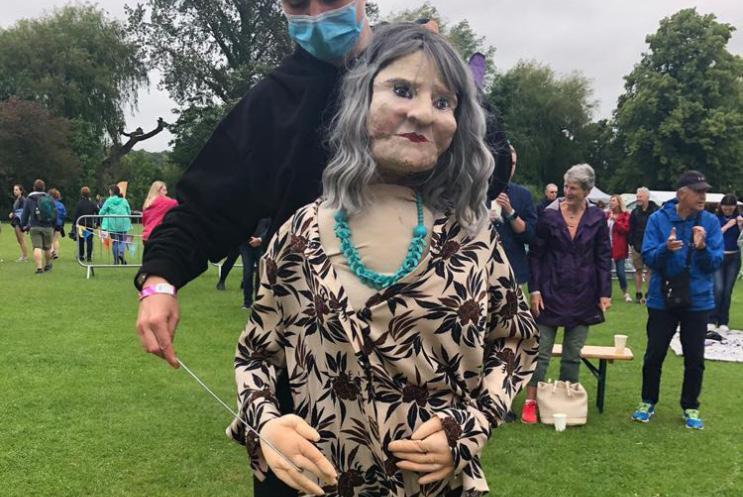